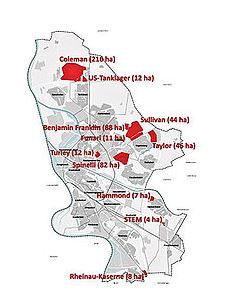 The future supply of electricity, heat and fuels will be decentralized, renewable and cross-sectoral. It must be as efficient and cost-effective as possible. In addition to Mannheim University of Applied Sciences, seven universities of applied sciences, two universities, the Center for Solar Energy and Hydrogen Research Baden-Württemberg (ZSW) and the Fraunhofer Institute for Solar Energy Systems (ISE) have determined how cities and urban agglomerations can successfully implement the energy transition according to these specifications as part of the ENsource project. On the part of the university/CeMOS, the developments were accompanied by Julian Deuerling, Frederik Wunder and Prof. Dr. Matthias Rädle.

The results of five years of research work and testing in case studies were presented to the public at the end of February 2021 and recorded in a 180-page book. The methods and planning tools developed in the project provide municipalities with tools and calculation options on how best to design the energy supply for their neighborhoods.

In a collaboration between the City of Mannheim's Economic Development Department and the CeMOS research center at Mannheim University of Applied Sciences, data from Mannheim's Benjamin-Franklin neighborhood, a conversion area, was provided as a model example and study object for the developments. "The ambitious goals of turning conversion areas into energy-efficient, smart and future-oriented urban neighborhoods were an ideal reference scenario to test and validate such calculation and optimization methods" said Georg Pins from the Economic Development Department of the City of Mannheim and driver of the "Blue_village Franklin" strategy concept.

Cities and urban agglomerations play a central role in the successful implementation of the energy transition. Worldwide, more than half of all people live in population centers, and around 80 percent of greenhouse gas emissions come from there. Therefore, the transformation of the energy system must be realized primarily here. The software tools developed enable the comparison of different energy supply scenarios for neighborhoods with private households, commerce and industry.

Is it cheaper to completely refurbish a neighborhood in terms of energy or is it more worthwhile to invest in renewable energies? How can consumption and generation be intelligently coordinated through networking and communication? And how must solar plants, wind farms, biomass plants, combined heat and power plants and storage facilities be combined so that neighborhoods can be operated on a 100 percent renewable basis?

The scientists investigated, calculated and answered these and other questions in a total of five regions. In addition to the Benjamin Franklin neighborhood, the ENsource tools and services newly developed in the project were applied to example projects in Stuttgart, Mainau, Rainau and Schwieberdingen.

In this way, energy procurement costs as well as consumption peaks for the overall system can be minimized in a grid-serving and low-emission manner. Services of this kind are of great interest to planners and operators of plants, grids and districts. The plant park for energy generation, energy conversion and storage is then designed modularly and flexibly according to demand, and operation is continuously optimized.

The need for this is growing: the increasing proportion of green electricity, as well as more electric cars and heat pumps, are challenging the distribution networks in particular at the municipal level. They have to absorb renewable electricity that is dependent on the weather; in addition, power peaks that occur on the consumer side should be avoided. Shifting consumption and intermediate storage of energy help to balance generation and consumption as well as to enable cost-efficient supply. However, this requires coordinated energy use within a neighborhood based on digitally networked actors that goes beyond mere self-optimization by individuals.

Further information on the project: www.ensource.de