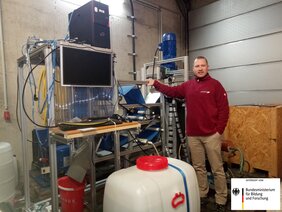 Water is the most important staple food for humans and also a basis for ensuring and further developing their way of life and quality of life. This requires a safeguarding of this resource for the future. Until now, drinking water could only be treated by desalinating seawater or purifying polluted surface water in large-scale plants. At the university's CeMOS (Center for Mass Spectrometry and Optical Spectroscopy), a small self-sufficient desalination plant has now been developed that can be operated in an ecologically sustainable manner using renewable energies and is suitable for supplying remote residential units or individual hotel complexes.

Due to an increasing world population, which according to the United Nations already amounts to 7 billion people today and whose number will have risen to an estimated 10 billion by the year 2100, and the already apparent effects of climate change on the number, duration and amount of precipitation and the resulting increase in droughts, it will be necessary to design the water balance of each country, island or household in such a way that existing water resources are not definitively exploited or exhausted. However, not only the effects of climate change are problematic, but already today the pollution of existing surface waters, which makes them unusable as sources of drinking water, as they contain the sources of diseases such as tuberculosis, malaria and diarrhea.

The system now developed by Lars Erlbeck as part of his dissertation at CeMOS is based on a fundamentally natural process, such as can also be observed in Antarctica. Water that has been cooled to crystallization has pure ice crystals surrounded by a salt solution. Because there are also salt solution inclusions in the ice block between the individual crystals, the ice produced in this way is not edible at first. As the ice mass grows, the mountain pushes further out of the surrounding salt water and the enclosed liquid volumes slowly trickle back down into the sea over a long period of time. Thus, pure drinking water is naturally formed in the upper part of the iceberg.

However, because this process is technically too slow, a technology must be found to speed it up. One possibility is the crystallization of seawater to form an ice slurry. This ice slurry is then compressed in such a way that the liquid inclusions mentioned above are pressed out, leaving pure ice of drinking water quality. In the process developed at the university, this is done by a screw that transports the ice slurry and a die that leads to the separation of ice and solution, similar to an extruder.

This initially simple-looking technology, if properly designed, allows flexibility with the size of the plant and thus with the amount of production. This in turn makes it possible to manufacture processing plants for the specific application. The advantage is that the plant can be operated purely on electricity, which in turn can be easily generated using renewable energies due to the adapted size of the plant. Thus, plants are also conceivable in remote areas, which so far do not have any centralized electricity connection and allow the production of drinking water in a decentralized way, which is the main difference to current alternatives.

Currently, two plant sizes are being investigated or are in the final stages of development, whereby the application is intended once for private households up to village communities and once for e.g. hotel complexes.