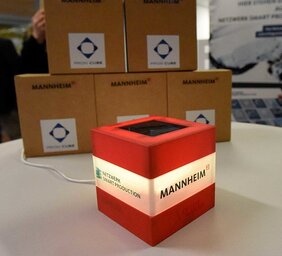 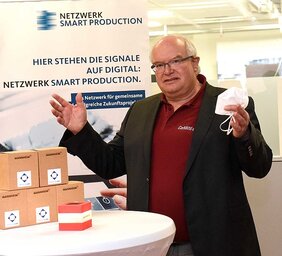 Mannheim University of Applied Sciences and ProxiVision GmbH in Bensheim have developed a handy system for measuring aerosols indoors. In doing so, they are using a sensor that was originally intended for determining fine dust concentrations. The first Mannheim Cubes have now been handed over to a Mannheim school together with the city of Mannheim and the Smart Production network and are intended to help it comply with its ventilation concepts. In addition, the Cubes can be used in the classroom to teach current techniques and lesson content in a practical way.

Aerosols from the air we breathe are considered the greatest risk factor for infection with the SARS-CoV2 coronavirus. Particularly in moderately ventilated indoor spaces, there is a risk that the tiny droplets from the air we breathe will collect in the air for a longer period of time and spread the virus - which is why strict ventilation concepts are now in place in many public places and especially in schools. But a residual uncertainty always remains: Has the room really been ventilated thoroughly enough? At what point does the aerosol concentration become critical, and can one not dare to keep the window closed for a while after all?

Mannheim University of Applied Sciences has developed a solution to this problem: At the CeMOS (Center for Mass Spectrometry and Optical Spectroscopy) competence center there, a battery-powered, portable device for measuring fine dust was built several years ago, and has now been converted into an aerosol detector without further ado. CeMOS researcher Dr. Thomas Schäfer played a leading role in both developments and explains why it is so easy: "The optical sensor makes no distinction between dust particles and tiny liquid droplets. It counts every particle between 300 nanometers and 10 micrometers in size that passes the light barrier inside it."

For the aerosol detector, for which a patent has since been filed, Schäfer and his team thus use the same sensor technology as for measuring fine dust, but in a double pack: one sensor simply measures the room air that is sucked in, while the second heats the sucked-in air to such an extent that liquids evaporate. From the difference between the two measurements, the device then calculates the amount of aqueous droplets present in the air - enabling it to reliably distinguish between solids and liquid particles. The measurement data is output as graphs - for example, of the last 30 days - so that aerosol concentrations can be monitored and documented over longer periods of time. In addition, a dashboard is used on which several rooms can be monitored via a traffic light system and which issues a warning as soon as too many aerosols accumulate in a room. Later, there will also be an app for mobile devices.

In the meantime, marketing of the globally unique device has already begun. ProxiVision GmbH, as a cooperation partner of the university, has completed the first devices with the name Proxi Cube. Through active involvement in the Smart Production network, an initiative of the City of Mannheim's Economic Development Department, the Werner von Siemens School was won over as one of the first users and, with Nevoox Europe GmbH, a Mannheim-based sales partner was found who has taken over exclusive worldwide sales of the device.

Of course, the technology is not only of interest to schools: "Hotels, bus companies, restaurants, building automation companies, hospitals, transportation companies and many other industries can also use this technology for the safety and well-being of employees and guests," says Thomas Walch, Managing Director of Nevoox Europe GmbH, "Until now, a large number of sensors were needed to obtain so much data from the room air. The fist-sized Proxi Cube does all this independently and automatically," Walch said.

"The city of Mannheim is driving the development spirit of its universities and companies through an active innovation policy. To this end, the Mannheim Economic Development Corporation initiated the Smart Production network as a central innovation cluster for smart technologies in the Rhine-Neckar metropolitan region. On the way to becoming a smart city, the development of the "Mannheim Cube" is a key project," said a delighted Mayor Michael Grötsch at the presentation. The project opens up opportunities worldwide to meet current challenges ranging from Covid-19 to climate protection and was developed in cooperation with the CeMOS research center at Mannheim University of Applied Sciences with many more of the approximately 50 network partners. Business development agencies and schools are pilot customers of the "Mannheim Cube". The Proxi Cube will also be available in stores from April.